My friend Liam flew in last night from Los Angeles to crew for me. Annie snapped this shot of him over Christmas when he visited: 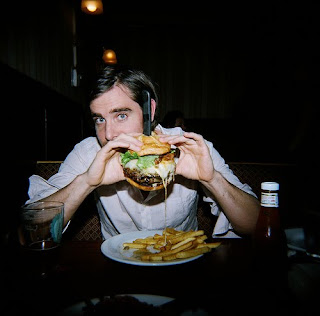 all photos are by Ann, BTW

The hamburger he's about to attempt to consume is called "The Ridiculous". It harbors: One pound of beef, stuffed with proscuitto, salami, blue cheese, mushrooms, onions and peppers, topped with havarti, jalapenos, swiss, bacon, cheddar, pepperocinis, and a portobello mushroom.

He's one of my closest friends, and he'll spend day and night shoving food and drink in my face and keeping me on my feet. Hopefully, this burger will be absent. Until after the 100, that is.

He'll be driving out Saturday morning with Mariko, while I'm bounding up and down the trail for the first 29 miles. Annie and I met Mariko through a certain photo-sharing website at a party. As it turns out, not only is she a photographer, she's also a seasoned trail runner. Who knew, right? She and I exchanged frequent emails during the webcasts for Hardrock, Badwater, Western States, and Leadville, geeking out in excess about splits and finishers' times. When she offered her soul for 25-30 hours to crew for me, there was no way I could refuse. Her years of experience of trail running will be an invaluable tool. Plus, if she can "Hello Kitty" up a pic of me covered in salt and dirt at mile 75, I will have won the race, in my opinion. 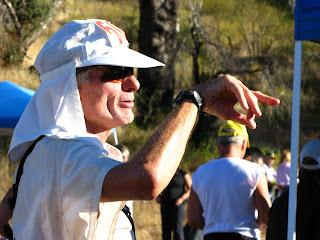 As you likely know, pictured above is Bud. Bud is an old-school 100 mile runner (his first was over 20 years ago, when only he and about 300 others were running these damned things) who I had the great pleasure of meeting/running with during my first ultra marathon at the Calico Ghost Town back in 2006. He's been a continued inspiration to me, in ways I won't get into in this post, and will be running me in from mile 75 to 101.9 (that extra 1.9 miles is gonna feel like an extra 100, I'm guessing). His sensitivity, knowledge, sense of humor and wisdom will be wrapped around me like a security blanket those last 5-7 hours. Plus, as I told him, he's the one who got me into this mess - he'd BETTER drag my ass to the finish!

Lastly, and not leastly (sp?): 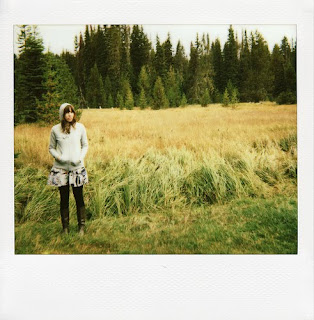 Dammit, Annie, how are you so awesome? You've put up with my constant exhaustion, ridiculous absence from social gatherings, stinky running gear, stinkier body odors when I return home from training, an appetite that even a glutton would call "ridiculous" (see first photo), my weak utterances of "ugh" as I lay prostate on the sofa watching free, on-demand, crap horror movies...the list could go on until the internet ended, so I'll stop there. But know that I've not taken one second for granted of your utter selflessness during this intense, incredibly selfish training period of mine. I love you, and knowing that you're out there while I'm inside this insane adventure - having your own adventure - will be part of the fuel that keeps me pushing during the down patches.

So, with that, my final blog post before heading out to the hotel near the course tomorrow. See you all on the other side!
Posted by rustyboy at 9:25 AM

With an amazing crew like that behind you, how could you NOT have a fantastic run?!? Good luck, and I can't wait to hear from you on the flip side.

Best of luck mate - in the words of Walt Disney* "you're already a winner!"

YEAAAAAA!!!! You are gonna rock it! Good luck and have fun!

Thanks for the crew lowdown too. Very cool. No matter what happens, you clearly have a sweet team behind you, and that is pretty special right there.

Help, the website doesn't have results up yet. How'd it go? I can't stand the suspense! Post something!!! (I'm guessing you had a severe bout of awesome, but regardless, I hope you are well and recovering!)