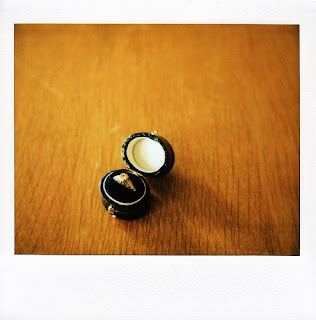 I showed her this ring.

I asked her one question.

Vernor's ginger ale is a current favorite to guzzle midway through a long one. Add a PB&J? EFFING GORMET MEAL!

I have a 15 miler tomorrow: My first back to back long runs in over a year. And then, Annie and I are attending this awesomeness.

By the way, if you're keeping score:

Gnats flying into the eyes: 7

Gnats flying into the mouth: 4
Posted by rustyboy at 6:20 PM 3 comments:

In the single most confusing Hollywood casting choice of all times, I present to you:

The Doobie Brothers on "What's Happening"
Posted by rustyboy at 5:15 PM No comments:

We loaded up Ann's Jetta with goodies and gear Saturday afternoon and headed south and east towards the tiny mountain town of Sisters, OR, nestled in the Deschuttes National Forest, 3500' above sea level in the high deserts of central Oregon.

I ain't gonna kid ya: We live at (roughly) 4 inches above sea level in Portland. The lion's share of my training is done at a maximum of 2500' when I can access the Columbia Rover Gorge, and that's been snowed in since December. At Forest Park, where 99.999% of my training has taken place, I've been maxing out at 1500' and averaging at 600'.

What this mean, my dear, bored, number-crunching reader, is that my red blood cell count isn't near what it needs to be to run comfortably at 3500-5000'. I knew this going in. And boy, howdy (do people say that anymore?), did I suppose correctly.

I snarfed down a pasta dinner, guzzled a couple of beers in the room, and passed out watching This Is Spinal Tap, I think somewhere around when Arti Fuffkin asks for the band to, "Kick this ass for a man, that's all. Kick my ass!" At 2AM, I woke up, wide awake, knowing that this is my cycle when trying to sleep at higher altitudes. My restless slumber continued until 7AM, when I dragged ass outta bed, made a pot of java for us, and readied my race gear for the 9AM start.

Yes. 9AM start. What am I, The Queen or something?

We headed to the start at the Sisters Middle School and, as Ann used the "facilities" in the gymnasium, I did a quick, 2 minute warm up jog. And quickly realized that I was breathing 2% oxygen (I may exaggerate for effect from time to time). She quickly snapped a shot of me donning a RAD technical shirt sent by a certain German runner and off we headed to the start.

We crowded together, and I placed myself in the front 10% of the pack, as we would trickle down narrow trails to start, and I wanted to get ahead early on. I had a "secret" finishing time of 3 hours, but with the lack of O2 in the air, I dropped that altogether and decided to shoot for having fun and getting in under 3:30. Or 3:45. These numbers would schizophrenically change throughout the duration of the race.

With the shout of the RD's command to "Go!", away we ran, and I watched the leaders peel away like they were on ice skates, headed downhill. Meanwhile, inside my own body, my lungs, to quote Lloyd Bridges in "Seahunt" were, "BURNING FOR AIR!" I noticed that, while my legs appeared to be moving at a 9:00/mile pace, my lungs felt like I was on a full sprint, and I heard the huffs and puffs of other sea-level dwellers growing around me. We ran along a LOOOOONG gravel road that looked to stretch into western Idaho and finally hooked a right turn to the climbing singletrack.

There were two versions of the race:The 30KM and the 60KM. I - at the behest of my running coach (and ultra running champion) Warren Finke - dropped my distance from the 60 to the 30 a few weeks prior, as I'm using these races to train for September's 100 miler. And I'm glad I did. Because this course is a challenge-and-a-half. The 30KM welcomed runners to run with their dogs, which was a first for me, and it was SO damned cool to experience! I was running behind a woman and her dog, Porter, for the first mile or so on the singletrack. Porter was having the time of his four-legged life. I began to envy those extra two legs, as the climbs were gradual, but I could feel them. Eventually, we reached the first aid stop and Porter took a watering break. I snagged a PBJ square and ran through the aid stop, continuing the climb as we all settled into our individual paces. I had to keep reminding myself to run for comfort, not time, because the lack of air (I mentioned this already, right?) was going to play havoc with my lactic acid, and I didn't want to run the final 5 miles with dead legs. BUT, I promised myself to not walk any of the ascents, no matter how steep.

I began wondering if I'd come across my pal Kate, who was running the 60KM and got a 2 hour headstart on me, when lo and behold, who comes winding down the trails towards me but Kate herself. She'd slipped on a sheet of ice about 30 minutes prior and banged her head pretty good on it. I checked for bleeding (there was none), but she did manage to host a nice, pear-sized lump. She told me to get a move on after a couple of minutes, so we bade each other well-wishes and up, up I continued.

I need to find the elevation charts for the run, but I can pretty much guarantee the 30KM had 2000' + of climb, which crested us at 5000' +. I hit the ridge up top and was in AWE: The mountains rose all around me, and I was easily a few hundred feet above the tree line. The sentiment "wow!" was uttered aloud as I looped the ridge and started my descent down the narrow, rocky trail. I hit an aid stop, grabbed another PBJ and headed down, deciding that I must be at least 11 miles in: It was time to punch the pace and hammer the downhills.

We wound down and I began - as is my usual - to overtake runners in the last 1/4 of the race. I conserve so damned much up front, which is good, but I wonder at times if I upped *juuuuust* a little more during the first 3/4 how I'd finish. Four of us formed a conga line, but I eventually shot ahead, hitting the final aid stop at 2:22. The workers (middle school XC runners - it was so damned cute!) told me I was 3.9 miles from the finish. Dashing off, I calculated I could finish in 3 hours by running under 10 minute miles! Holy hell, really????!!?

More descents, more challenging trails and I finally popped out on the gravel road: The long - and not winding - gravel road. I kept my pace steady, overtook a few more runners, and heard a woman's voice from behind me yell, "Pacino!" I looked to my left, and there was a strapping young dog, panting and keeping pace with me. He was one of those dogs who looks like he's wearing a perpetual smile. Eventually, Pacino's mom caught up to me, we chatted a bit, and then she overtook me without missing a stride. I had been "chicked" and "dogged" in the final mile of a race!

A few more hundred yards of trails and I hit the start area, knowing that the finish was only 1/4 mile away: A single loop around the school's track. I raced through the parking lot and entered the track area, deciding I'd easily hit 3 hours and some change. Then, I turned the final corner and saw the official clock: 2:59:45! I turned up the gas and crossed the finish 5 seconds under the goal I had - only 3 hours prior - considered to be next to impossible!

Annie snapped a "finish" pic and then burgers and beers and rootbeer floats were had:

I was actually quite surprised how healthy I felt, regardless of the altitude and climb of the run. Hopefully everything goes this smoothly on my way to Hundred in the Hood.

The RD just sent out an email, and it looks as though the "30KM" was actually 20 miles! According to the finish results, I came in 53rd overall out of 167 finishers.
Posted by rustyboy at 10:30 AM 5 comments:

In a couple of hours, we're off to Sisters, OR so I can run the Peterson Ridge Rumble.

Originally I'd signed up for the 60KM, but my coach thought it best to hold back for the 30KM (which is actually a little over at 19.5 miles), as my mileage is about to ramp up significantly in the coming 2 weeks. It's my first race for "me" since the Sycamore Canyon 50KM where I was welcomed into the world of asthma attacks (100% thanks to you, Los Angeles, for your crap-ass air conditions). I'm pretty damned excited. My coach has me finishing in 3 hours, but the race starts at 3,000', so we shall see.

Keep your eyes on this site for a race report!
Posted by rustyboy at 11:21 AM No comments: