It's flat-out bizarre, writing a "report" about a race, having not run it, having not crew or paced for it, but whaddya know: Here I am!

Gary and I headed down to Squaw Valley (God bless him and his Subaru) with media passes in hand to chase around Hal and Kate, documenting them for a piece to submit to This American Life (that enough links in a row for ya?). We made it down in 11 hours, dumped our junk and gear at the hotel in Truckee, and grabbed some dinner. After some good ol' fashioned, restless sleep (on my end - man, were my wheels turning/grinding), we woke up to meet Kate and her crew near the start in Squaw Valley for packet pickup. 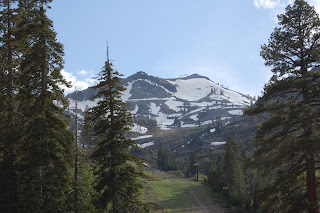 She seemed more than ready to run the race, and I shadowed her every step through the pickup process. MAN, Western States does it right! Check it out: 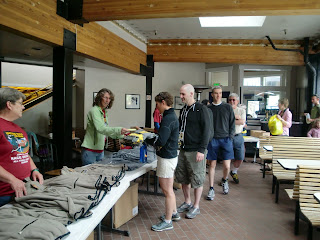 After snagging some sweet schwag, getting weighed and her blood pressure taken, Kate was off to relax. Next up, following the Big Dawg: Hal. 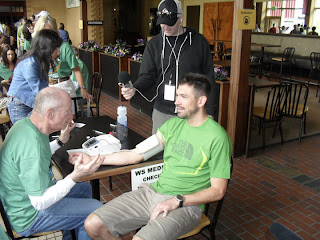 Me, as far away from Hal I would get for the entire day

Hal opted to swing by packet pickup towards the very end, as he wanted to conserve energy and knew people would be wanting to catch up. So I shadowed him through pickup (he dropped some GREAT sound bites for me - dude knows the drill), and while he was (pictured above) getting his BP read, the volunteer asked him if he'd run the race before. Hal, being the most excellent dude that he is, was sheepish and humble. 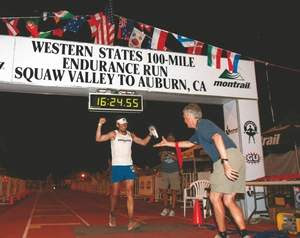 Once those duties were polished off, Hal headed back to home base, and Gary and I ran a 10 miler with Leslie before showering and eating home made pasta at Kate's condo.

Okay, let me take you back about 6 years, when I first began running: I became particularly obsessed with running trails (because it's the ONLY WAY TO RUN) and became a member of an online forum that now, speaking frankly here, sucks. But back then, there was an "ultra running" group, where I'd first befriended Kate and Leslie. Years later, we would meet by fate and happily become intertwined in one anothers insane endeavors.

Thing is, what got me interested in running a 100 miler was a race report from Western States by a runner called "Mudrunner". It was heroic, humble, hilarious, and...another "h" word I can't quite dig out. This was "the moment". I actually said aloud, "I will run 100 miles." 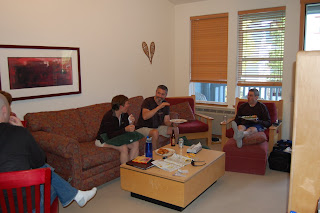 While we're eating, I meet Kate's pacer, Glen, who is in from Vancouver, Canada (he'd be running the final 40 miles with Kate as support). We chit-chat, I ask him if he'd run Western States, he answers yes, in 2004, but he'd paced a friend a couple of years ago, when he and Kate had met.

Something sparked in my wee brain.

I was sitting face-to-face with my inspiration to run a 100 miler. AT the 100 miler he'd reported on.

Me: "I met Kate and Leslie by chance on the trails a couple of years ago. I was all, 'You're KateMD! And YOU'RE Fatozzig!"

to be continued
Posted by rustyboy at 12:09 PM 5 comments: 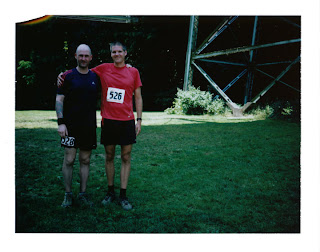 Jeff: "I am SO lucky to put my arm around this sweaty guy YET AGAIN!"

I find it difficult to write a race report for marathons, since I run about 2/week while in heavy training, so I'll quickly sum up yesterday's:

1. Jeff and I hung together for 24 miles, yammering away. I'm sure I talked both ears off about Western States.

2. Jeff pulled away at the 4 hour mark, leaving me with my own thoughts...which involved Western States.

3. My attempt to finish in "4:20" to get a photo of me standing beside the clock, pretending to toke on a joint, was missed by 8 minutes due to the fact that I'd banged the hell out of my quads on a hilly long run Friday.

4. There are really evil trail bandits in Portland that move course markers at every race. Wendell (the RD) has no idea how to beat them at their game.

5. Working a 7 hour shift after a marathon - on your feet - really is miserable. And knowing you have 15 miles the following day doesn't really help.

6. I had a blast! So nice to do a training run that's supported and with other people.