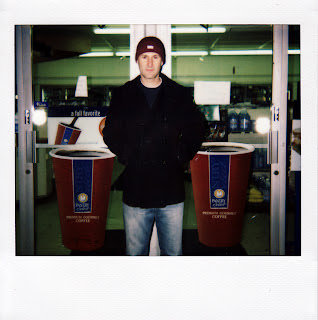 Everyone gets to have a "first job". For some, it happened in college. For others, well, they're still waiting for it to come (ATTENTION ACTORS: YOU DO NOT HAVE A REAL JOB).

My first line of employ was at White Hen Pantry® on Roosevelt Road in Westchester, Illinois. I don't recall exactly HOW I landed the gig, but somehow, I found myself behind the counter at this convenience store several days/nights per week, stocking shelves, printing lotto tickets, selling beer and cigarettes, all at the age of 15.

The owner's name was Tom Vertovec, and he was a pleasant mustached man with a smooth, calm tone to his baritone voice no matter how desperate the situation to get more Hostess products to the shelves. Working with me: Chris, the oversexed 21 year old; Liz, the other oversexed 21 year old; Missy, the oversexed 22 year old, and Adam; the slightly slow gentleman whose talk of "PRETTY, YOUNG GIRLS" entranced me, as he was always speaking about women over 40 when using that terminology.

Sundays, I'd arrive pre-dawn and stuff Chicago Tribunes and Sun Times for early morning customers. I'd spend countless hours in the walk-in freezer refilling milk, soda, and beer for thirsty suburbanite Chicagoans, breaking down boxes, stealing lunch meat for meals, and goofing with my fellow employees.

I remember not being very happy that I had a job at times, since I *could* be out and about...welll....doing....something else. I suppose this is why it's important to have a job as a teenager. You can't do much at 15 without a driver's license.

I carried the job from sophomore to junior to senior year, rarely missing a shift, until, inexplicably, one day, Tom had the store taken away from him by corporate.

I moved on to other odd jobs my final year of high school, but none had the sense of camaraderie that the White Hen® on Roosevelt once possessed.

Ann and I, during our trip to Chicago for Thanksgiving last week, stopped by the ol' Hen (we never called it that) and found out that all White Hens® are to be converted to 7-11s within a few months.

How easily time alters our lives. But how wonderful the memories.
Posted by rustyboy at 9:26 PM 2 comments:

Tonight, I did my first swimming cross-training at 24 Hour Fitness. As previously mentioned, I also belong to my beloved shitty, local gym, but alack, as a shitty, local gym, it doesn't contain a pool. Or very much equipment. But I needed a pool, so I signed up for 90 days at the bohemoth located nextdoor to the Arclight Cinema and headed over this evening after work.

The place. Is. Massive. It's insane: Two floors, probably in the vicinity of 20,000 square feet, 30+ elliptical machines, 30+ treadmills, 15 stationary cycles, free weights/machines, and a 4 lane pool.

Local shitty gym? 8 ellipticals, 6 treadmills (one has been "under repair" for around 2 months now), and a locker room door that exposes the men's showers to anyone who happens to be in the stretching area.

24 Hour Fitness also has: A "lounge area" complete with espresso machine, a number of vending machines filled with water/sports drinks, and a desk area where personal trainers sit to prep for their day's work that rivals any college lecture hall.

Local shitty gym? One case filled with waters and a small assortment of sports drinks and a bench by the door where you can plop your ass down to pull on a sweatshirt.

As I entered the gleamy, glistening portal into the gym of the future, I pulled out my temporary membership card I'd printed out when I signed on online. Presenting it to the 19 year old boy behind the counter, I stated proudly, "New member!", at which he raised a curious eyebrow and confusedly took the paper, scanning it beneath the scarlet web of the bar code reader, and handed it back to me.

He shrugged. "Around the pool. Kinda behind it."

Three 21 year old hipster girls walked past me, giggling and texting, all donning what could have been workout gear straight out of 1976.

I wandered aimlessly, finally catching a glimpse of someone else obviously making a charge for the men's lockers, following him down a mildly confusing, Spinal Tap "Hello Cleveland!" hallway, before finding the lockers.

My swim went fantastically. Just 30 minutes kicked my ass, and I had an entire lane to myself the full half hour. Unfortunately, as I stroked along down the lane in my Speedo, I was on display for the parade of members walking in the entrance, glancing through the wall of window as they chattered in their cellphones over the thudding, piped-in bass music.

I began longing for the inane conversations I've had with my shitty local gym staff; watching the fat, old men in their dress shoes and soccer shorts try to figure out the machines; the middle-aged gay couples joking loudly with one another at the free weights, the mass-of-muscle personal trainer who always gives me the biggest smile and "HELLO!" when he sees me.

It's so easy to be persuaded by the luster of the shiny and new. It doesn't hurt to experience everything you can, but remembering what really makes you feel at home - be it a 75 year old Russian man in spandex straining to lift a 10 pound weight, or a front desk worker who can't wait to gossip about the hit and run he saw out front earlier that morning - can't be replaced by flashy machines or athletic gods and godesses.

I guess when it comes to it, I'm like my gym: Local, and a little bit shitty.
Posted by rustyboy at 9:08 PM 4 comments: