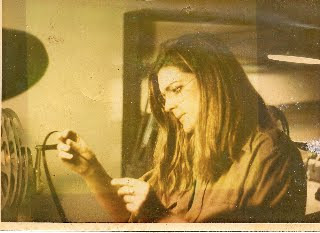 I have been notified that as of yesterday morning, my dear, sweet friend and teacher in this life, departed on to her next great adventure.

The tears I now shed are of sadness and of joy. What an honor to have been part of her life.
Posted by rustyboy at 9:07 PM 2 comments:

Back in 199(coughcough), when Ronald Reagan had only been recently dethroned, and our biggest fear as a nation was that some mustached guy in the middle east might just try to take over some small, little piece of sandy real estate and make it his own (it just dawned on me that an entire generation has known where Kuwait is located for their entire lives), I moved from Milwaukee back home to Chicago in pursuit of a burgeoning career in stand up comedy.

Clubs at that time were like present-day Starbucks: Two for every city block. Seriously, almost every bar/disco/nightclub/honkytonk housed at least one comedy night per week (we once almost convinced a comic that another comic's mom okayed hosting an open mike in her basement. Yeah, THAT prevalent), so every wiseass in Chicago had the chance to give stand up at least a single shot. 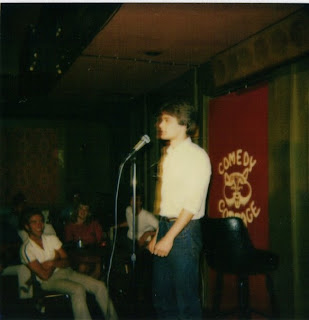 The Comedy Cottage (above, pictured: comedian Greg Glienna, probably around 1987) was started by Jay Berk and "Big Ed" Hildebrand, sometime prior to the comedy boom of the mid-80s. At the time of it's inception, it was one of the few clubs outside of New York and Los Angeles, so many soon-to-be big names played a week there en route to either coast. Example: In the late 90s, I once heard that Jay Leno ran into Big Ed and hugged him.

Indeed, they were a big deal.

As the boom began, well, BOOMING, the tiny club (which was actually more of a banquet room attached to a restaurant) drew sell out shows every night of the week, and with it's success, Jay and Ed (not the two most easy to get along with fellas) began butting heads, I think, quite literally at one point. Their partnership quickly fell apart, and Big Ed stayed on to run the Cottage, while Jay, in the most passive-aggressive move in the world of comedy - and that's saying something - opened the Last Laff about 1/2 a block away.

Begun, the club war has.

Mysterious happenings, like rocks crashing through club's windows, began to occur, and it was made clear as a half-emptied bottle of gin that if you played at Ed's, you didn't play Jay's, and vice-versa. Eventually, this "understanding" dissipated, and we were "allowed" to perform at both clubs, with minimal grumbling by the respective club's owners.

If Big Ed ever caught a comic talking during a show in the back of the room at the Comedy Cottage, he would inevitably haul his massive self over to you and bark: "IF YOU WANNA TALK, GO TO JAY'S!" in full voice, interrupting the comedian onstage even more so than your whispering and cackling. This became an HUGE inside joke for Chicago comedians, and we'd riff endlessly and mercilessly:

and so forth. To this day, if you meet a comedian who began performing in Chicago in the 1980s, promptly state, "If you wanna talk, go to Jay's!" and you will win a special place in their heart.

As stand up's star began to fade, and the over-saturation of televised comedy began to pull the "art form" further under, Jay was forced to shut down his club, and Big Ed reduced his 5 nights/week to 2, and eventually altogether locked his doors. I don't believe they ever made amends either. Last I heard, Ed passed away in Las Vegas some years ago. Of course, I heard this info from a fellow old-timer comedian, so the riffing - in true 21 gun salute status - picked up right where it left off:

"If you wanna die of a heart attack, go to Jay's!"

"If you wanna cremate me, go to Jays!"

Annie was going through boxes in the basement and unearthed a couple of Polaroid of mine from back in the day: 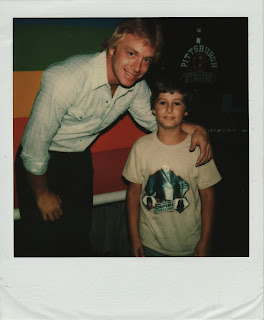 That's me, at the Ford City mall on Chicago's south side, near where my grandmother lived. The man towering above me is Buddy Bell, ex-third baseman for the Texas Rangers. I guess they were in town playing the White Sox, as evidenced by: 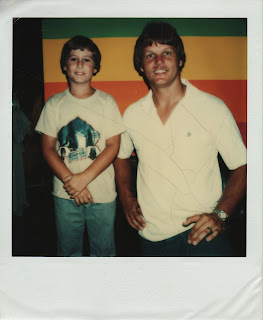 Wayne Nordhagen's presence. I distinctly remember that my mom and I were wandering through Sears when we came across them, randomly standing there.

You really don't get this any more: Athletes are treated more like rock stars nowadays, untouchable to the public...unless you wanna fork over some dough for an autograph.

The Finale: How I Learned to Love a Loincloth

The title of these entries, “How I Learned to Love a Loincloth”, was a cheap marketing strategy. You know: Somewhat obtuse, with a hint of sexuality. If I didn’t have a soul, I’d be in advertising. Or still in entertainment.

Before I launch into these entries’ namesake story, I want to explore – more in depth – other kid’s party experiences, but I realized as I began fleshing them out, they are better suited as bullet-pointed one liners. Here are a few:

• I once – at 29 years of age – portrayed Santa Clause, complete in shitty false beard and pillow added for belly, at a Christmas party in Los Angeles’ Korea town. I sat on a throne in a hotel conference room for several hours and watched the party unfold. Best piece of the night: A lip-synced version of “Men in Black” performed by two Korean pre-teens, dancing ala Will Smith from the music video.

• Hired by a South Central LA high school, donning masks and robes from hit horror flick Scream, another performer and I ran in and out of classrooms, terrifying the kids. We were walked to our cars by a teacher afterward, quote, “Just in case.”

• This job did have one or two perks: After playing Prince Stephan from The Little Mermaid alongside (an insanely smokin’ hot) mermaid Ariel, we stopped to grab food at a bagel shop. Having to change from her mermaid tail to shorts, Ariel – a part time model - stripped right in front of me down to a g-string, all the while holding conversation.

Okay, now to clarify the loincloth.

Back in 1997, Brendan Frasier was selected to portray the live-action version of the hit 1960s cartoon series, George of the Jungle (pictured). Wouldn’t you know it, a year later, children were anxious to have the idiotic but affable jungle dweller appear at their birthday parties. 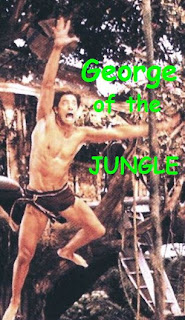 If you examine the photo closely, you’ll see what George’s costume consisted of: A wig and a loincloth. And this was handed to me by the cranky Caribbean costume-giver-outer one Thursday afternoon.

I held up the two, small pieces of leather held together by two tinier leather strands and stared at the wig. Perhaps this was payback for seeing Ariel in a thong?

I don’t know if you’ve ever attended a Korean birthday party, but I’ll paint this picture for you if you haven’t had the pleasure: Imagine…all of Korea. Okay? That’s who shows up.

I remember shaving my chest for this (ugh - the second of two times I made that mistake) and trying on the loincloth, I saw that not much was left to the imagination on my wiry, 150 pound frame. Plus, the wig looked like something a sad tranny would have buried in the back of his/her closet.

60 dollars for an hour, I thought.

Now, if you’ve never worn a loincloth to a party with 400 people in attendance, I’ll spell it out for you: YOU ARE THE NAKED PERSON AT THE PARTY. The look I received from the mom answering the front door was that of abject horror. But what did they expect? You’ve seen the movie – this is the uniform!

I was ushered in through a living room FILLED with dozens of (what I’m remembering as) attractive Korean women of every age, all smiling and snickering. And this was just a warm up.

Coming to the back patio, I entered to a sea of black-haired, tiny people, all waving to The Naked Guy at the party. The kids (thank GOD) all rushed me, laughing, excited, and ready to play. As I waded through the crowd of the clothed, my ass hanging out for all to poke, the children's enthusiasm began getting me pumped. After all, George is supposed to be kind of stupid, and I was hamming it up and getting belly laughs from the kids.

We forwent my normal show, and instead opted for actual games, like basketball. I must have run into that post fifty times, staggering and acting dazed while holding my head, and each time, I was like Carlin at Carnegie Hall to those little guys and gals. GENIUS.

This show took place in August, when children’s outdoor parties tend to die off and the kids head back to school. I’d already lined up my first television production job that was starting the following month, so I knew (and prayed) that this phase of my “career” was coming to an end. And even though I was in the closest state to total nudity that I could be in, surrounded by complete strangers, I became blissfully aware that I’d miss these kids, these experiences, these lessons.

As I packed up my things, I was swarmed by kids and parents alike, grabbing handshakes and hugs from what seemed like one thousand hands.

And with that, The Naked Guy exited, having at last learned to love those dangling squares of fabric, Batman’s cowl, Superman’s tights, wearing clown white face, Santa’s beard, Hercules’ wristbands, and Barney’s head. And I know that these children, now full-blown teenagers or even adults, have memories of a birthday when one of these characters magically appeared at a party in their homes, backyards, and neighborhood parks. I’m honored and humbled to have been a small piece of every last one of them.

Note: I did leave out one detail: When I first entered and walked through the crowd? Someone did grab my ass, quite intentionally.
Posted by rustyboy at 4:44 PM 1 comment: