These are the words I have heard on numerous occasions after, quite literally, crossing the finish line of an ultra marathon. But I'm getting ahead of myself...

Ann and I ambled out the door bright and early to the trails of Forest Park; I, signed up for the 50 KM distance, Ann, for the 10 KM. And boy howdy does morning come early around these parts.

We picked up our numbers, wandered around the start/finish area, stared in horror at the snaking lines for the port-o-potties, when I ran into Ruben (click here to see how he blew my ass away). I'll not save the reveal and tell you now: He KILLED the 50 KM course record and won the freakin' thing in 3 hours, 38 minutes. Then he rode his bike 8 miles home.

We ran into Brian, who works the kitchen the the pub and is brother to the twin sisters who own it. He's such a mellow, sweet, funny fella, and today was to be his inauguration into the world of ultra running...and marathon running. I don't think he'd run farther than 20 miles in training for this one, which took me back to a young man who approached his first ultra in very much the same way. I am, of course, talking about: Zac Effron.

We lined up, the 50 KM and the 20 KM racers, the race director tossed a few tips out about trail markings, and I snuggled up beside Ruben, so I could get out ahead of the majority of the pack (the 20 KM had 120 runners, we had 70). Then, with all the pomp and circumstance of any ultra, the RD yelled "Go!" through a megaphone and we were off.

I tailed Ruben the first 1/2 mile (he was running at what I like to call a "sprint") and fell into my own pace once I knew most of the pack was behind me. A few passed me here and there on the winding UPHILLS THAT LASTED FOR THE FIRST 6 MILES. I knew this was coming, but I wanted to see how hard I could push myself on this run, so my mantra was, "Stay on the 'good' side of 'uncomfortable'."

The climb is fairly significant, even if this 50 KM has "only" 3500' of gain (most have more in the 6,000' range) and I wanted to be on pace to hit aid station #1 in 1 hour, 5 minutes or less. I was really pleased to find myself refilling my water bottle and shoving PB and J squares in my mouth in under an hour!

This was both good and bad, as time would tell.

I scooted down the firelane and hooked a left back onto the Wildwood Trail. I smiled, calling it in my mind, "The Engagement Trail", as I'd just passed the spot where I'd proposed to Annie only one month prior. This section is all about down, down, down, and a few runners scooted by me (the 20 KMers turned around at the aid station, so it was just the ultra-weirdos now) and I heard another on my tail. I shouted, "Let me know when you need to get past!", to which he responded, "I'm good - let's keep it up!" This was Taber, and yet again, I met another truly cool person to run with during a big distance race.

I'm very familiar with Forest Park, so there were no surprises (save for one, which is coming up), so I went into auto-pilot, and we chattered away like a couple of schoolgirls amped up on Mountain Dew and the music of Zac Effron (there's his name again...why???). Taber ran the same race last year and very humbly mentioned he that he and his then-girlfriend came in dead-last. I asked his finish time (8 hours, 6 minutes) and gave him the good news that last year, I'd run in the DFL (dead fucking last) 40 minutes after his finish. We talked about our pace, and I told him I was looking to come in between 5:15-5:30, and the pace felt like that was spot-on. Wait until you see how spot-on.

Before we knew it, we were hanging a left up Saltzman Road towards aid station #2. We were about to do a 10 KM loop and then return back to this aid station, and I began thinking that Ruben should be on his way back any minute. Taber needed to use the "facilities" (as in, "not a tree"), but this aid station had no port-o-john. We snarfed down some food while I heard one aid station worker - younger gal - ask a woman around my age, "Do you run too?" Just looking at her, I knew the answer.

Me: "Oh man, you run those? Those people are fucking crazy!"

I eyeballed an uncut watermelon and whispered a secret prayer to the ultra gods that it would be sliced on our return, as the heat was growing. Taber and I headed down Firelane 5 to complete our 10 KM loop when, lo and behold, up the steep incline come Ruben, tailed by the 2nd place runner. And by "trotting" I mean "still sprinting" (his pace ended up being 7:03/mile. For 31 miles. On hilly trails.). I yelled, "I knew it! You BASTARD!" He laughed and told me he'd see me later. Yes, as in much later. As in, not on the same day.

We wound up back on Wildwood and rolled along until a small climb on Trillium trail: A nice, level, short, well-groomed piece of single track. I'M LYING, IT WAS STEEP, ROOTY AND LONG. I stopped to use the lavatory (aka, "some random tree") and eventually caught up with Taber again, and down we went. And I mean DOWN. Gas Line Road carries you downhill to Lief Erickson - the road that runs through the heart of the park - and on tired quads, the super-steep downhills came as a big-ass surprise to me. I would venture to say that we were crawling down 25% grade for a short bit. Once that kick in the ass was over, it was a short mile or so on Lief Erickson before we hit the climb back up to Wildwood. I never thought I'd welcome a climb so dearly. We power-hiked up the same bit we'd seen Ruben galloping up earlier and landed back at the aid station, stocking up on foodstuffs and water. Alas, the watermelon still sat whole on the table, as if still awaiting a blow from Gallagher's Sledge-O-Matic.

Down on Saltzman, we hit Wildwood again, which is where the sloshing in my guts began. I figured I downed too much water and not taken in enough salt, so I popped another electrolyte cap and vowed to hold back on H2O. Upon revealing to Taber my stomach issues, he offered his GI distress situation was growing more and more ominous. We were under 5 miles to the last aid station, where a Honey Bucket (grossest name of all times for port-o-potties, FYI) awaited. My legs were feeling a little trashed at this point, due to my pushing a little harder than my comfort zone. I remembered that I hadn't actually tapered my mileage very much during the week, not as much as I would have had I been "racing" this one, so I knew I was paying for it. We hammered the rolling hills and downhills and finally hit the 3/4 mile ascent to the aid station. When we arrived (mile 25), Taber jumped in the Honey Bucket (ew, again) and I made small talk with the aid station worker, who is part of Trail Factor: The local running group I belong to, with which I have yet to run with. Then I saw it:

I think I ate 1/4 of the watermelon. SO GOOD. I took off (Taber and I decided that the last 5 miles, all bets were off) and found myself back on Wildwood, knowing that I'd be losing 900' down to the finish. Piece of cake, right?

Willie Nelson penned a song a number of years back, about the desolation of living alone, called "Hello Walls." At this point, I entertained myself by stating, "hello, wall" over and over, as I'd hit "The Wall" myself around mile 28. I was DONE. I was fascinated by the feeling, taking it in stride; the fact that I thought that the only way I was going to finish this one was to tumble down head over ass to the finish. I engaged in a walk/run scenario, which I cursed on the downhills, and WOOSH, Taber dashed past me with a big ol' smile on his face! Funny how the mental distress of GI issues, once lifted, can send you sailing as though you're at mile 4 and not mile 29. I cheered him on and continued my slog.

"Screw this," I muttered. And began to run. And run. I knew I was about under a mile from the the finish and pushed. Another runner caught me, striding so strongly, I could only imagine how dead I looked by comparison. He yelled, "Let's do it! Let the adrenaline carry you!" and I picked up my pace, seeing the finish only 200 yards ahead. "Go for it!" I yelled, and he took off like a Zac Effron album on the Billboard charts. I've done enough of these big races to know that I can live with the extra 4 seconds on my finish time by finishing strongly and comfortably.

Pumping my arms and giving it my all, I passed Annie who was snapping pictures, and crossed the finish in 5 hours, 24 minutes. And not a single, full step beyond the finish, Wendell - co-race-director with his wife Sarah - smiled and offered the three words that would sum up this day's battle of Man vs Himself: 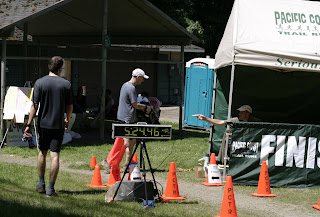 Taber had finished 3 minutes ahead of me, knocking - are you ready? - 2 hours and 40 minutes off his finish time last year! We congratulated one another, Ann and I thanked Sarah for putting together yet another fantastic event, and headed home for a shower and then out to the pub for food and brews. Once there, the phone rang: It was Brian, on the highest runner's high I've ever heard, ecstatic over the experience. AND, he finished only 15 minutes after me! Un. Be. Lievable.

I hope he enjoys his coaster. 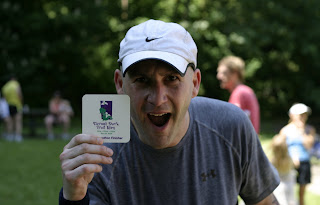 I found your blog! Great running with you. Thanks for the race summary. I have 2 of those coasters, if they make an alcoholic drink with watermellon, they might need to get exercised someday. See you down the trail.

Coaster? WTF? Can't you hang that around your neck like a medal?

nice write up. I felt like I was running along with you and was disappointed I didn't get a coaster at the end of the blog entry.

Congratulations! I had visions of my semi-debacle on that course last year. No rain and mud this year, eh?

I will be back to the course some day, as I want finish higher than DFL.

I continue to be amazed that I enjoy reading your blog so much despite having absolutely no knowledge or interest in running! Great work on both Russ.