Out of the gates, before digging into this, I have to admit: I was a band nerd. I've been a variety of nerds over the span of my lifetime (see below post), but from the ages of 10-16, you could find me snickering over the term "spit valve" or marching the streets in some of the worst uniforms known to humankind: 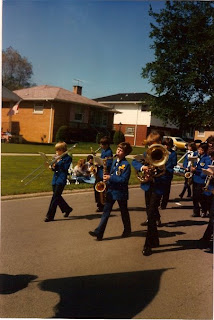 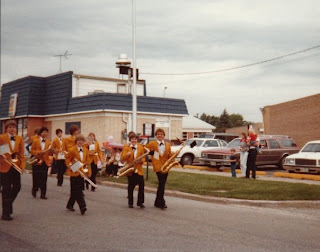 That second photo appears to be a young fleet of real estate agents invading suburban Chicago. With brass weaponry.

When I was 15, one of my fellow band geek friends (although he played drums, so there was a modicum of cool there) purchased tickets for us to see jazz trumpet legend Winton Marsalis in downtown Chicago at the Chicago Opera house. Note: His uniform? FAR COOLER than any I ever played in: 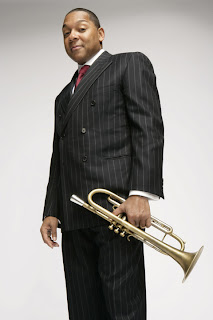 My friend, Rob, drove myself and two other dorks downtown, parking underground, across Lake Shore Drive, from the opera house. As we clambered and got all psyched to see a show that our grandparents would likely have been into, we passed through an underground tunnel that would pop us up on the sidewalk at the virtual doorstep of the performance hall. Well, somewhere in that 100 foot walk, someone swiped the tickets, and Rob's wallet, from his pastel, padded-shoulder jacket.

This was discovered while standing at the ticket window in the lobby. Being 15-17 years old, we began to lose, as they say, "our minds". I remember the older woman in the ticket booth being very patient and offering Rob the phone to call home, which he immediately did. As it turned out, his mother had bought the tickets with a credit card, and two phone calls later, the tickets were traced and we all heaved relieved sighs (my GOD, what if we'd brought DATES? Fat chance).

The transitional point is fuzzy, but someone told us to wait in the lobby and that they'd be back in a moment. When they did return, we were told to follow them. Confused, we ambled behind him down a hallway where hundreds of instruments in their cases lined the walls. What the hell was going on?

At the end of the hall, we took a sharp left - I remember that - and our escort opened the door.

Lo and behold, there stood Winton and his band, hanging out in the green room, in a cloud of "strange smoke".

He stood and extended his hand, thanking us for making it down to the show. He told us he was sorry to hear about what had happened but was glad all had worked out.

And just like that, I knew something amazing had just occurred.

The show? I don't remember a piece of it. I'm certain it was mind-boggling and beautiful, but the shock would last for days. All because one man had taken a few minutes to extend thanks and appreciation to a group of giddy young jazz nerds.
Posted by rustyboy at 12:33 PM

Okay, that is probably one of THE coolest stories I have ever read. You definitely have to hand it to a man who goes out of his way like that. Very cool. Very cool indeed.

PS - I, too, was a band nerd. Our jackets were nice and RED. Once upon a time, I played the clarinet, baritone sax, and (drum roll please . . .) the organ! That last one - nerdom all the way. Nowadays I just play CD's.

Guilty! Karen and I were both band nerds. Karen actually played flute, piccolo, and bells (xylophone). I was more of a hanger-on and was in the "color guard" (holding up a banner in Jr. High and then flags and "rifles" in High School (man, could I twirl). I did play the piano but it wasn't band mobile. And my uniform usually had a short skirt.

Anyway - great story! Glad you had your tickets stolen.