Ann will officially hate reading this. Why? Because it's a rant I go on far too often, with the passion of a martyr being hauled to the stake.

It's "The Star Wars Rant", Annie. Please close your browser and forgive me.

I. LOVE. Star. FUCKING. Wars. I saw the original at least 3 times in the theater at the age of 7. I still have my action figure collection, although really, we all know they're small "dolls" and I was a little Nancy to play with them as often as I did...and still do. "PEW PEW! The stormtrooper's dead!" can be heard late at night, erupting from the depths of our basement.

I'll spare everyone the obvious, "GEORGE LUCAS RUINED MY CHILDHOOD!" convulsing cries regarding the last 3 movies. They sucked Bantha pud. And if you know what I mean by that, God love you and your 1983 lightsaber replica.

No, I'm going to perform the ultimate act of sacrilege:

George Lucas phoned in his shit for the first three episodes as well.

So, the wannabe pilot, trapped on the sands of Tattooine, the boy who dreams of flying through space and defeating the Evil Empire. What was his name? 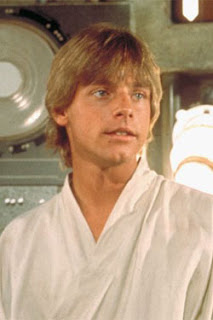 Luke SKYwalker. SKY. DO you get it? HE LONGS TO WALK IN THE SKIES PEOPLE!

And what of the renegade smuggler, who plays by his own rules and asks for help/friendship from no one. His name? 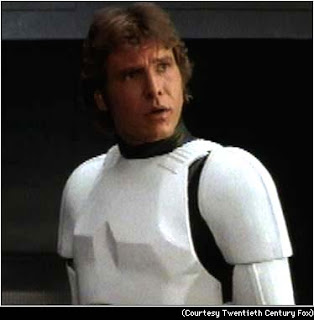 Oh, and poor Han. In one of the first scenes we meet him, in the dark cantina of Mos Eisley, who shows up to collect the money Han owes Jabba the Hutt? 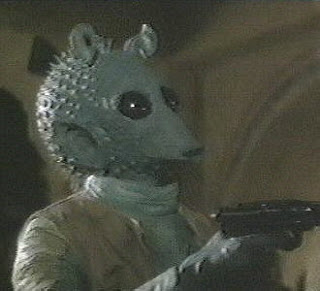 GREEDO. And get this, HE'S FUCKING GREEN JUST LIKE THE MONEY IN GEORGE LUCAS' WALLET.

These are but a handful of examples that make those close to me want to tear their ears off and shove a Tusken Cycler in my mouth and gently pull the trigger. But one MAJOR plotpoint hit me today while I was on a run (yes, I think about Star Wars when I run. It's a miracle I've ever even touched a girl), and it's a biggie:

In "Empire Strikes Back" ("ESB", my dear geeks), when Luke leaves Dagobah for Cloud City to fight Darth Vader (don't get me started on that Goddamned name. Seriously.), as Luke's X Wing lifts into the skies he so boldly dreamed of one day walking on - just as his name suggests - Obi Wan turns to Yoda, and the following exchange is had:

Obi Wan: "That boy was our last hope."

This is in reference to Princess Leia, who is Luke's sister. Of course, Luke doesn't know this information yet, and neither does Obi Wan, which is strange because in Episode 3, HE TAKES LUKE AND HIS TWIN SISTER TO THEIR NEW ADOPTIVE PARENTS.

Yes. Obi Wan was there when the two babies needed saving. But somehow, only 20 years later, he completely forgets she even exists. The hell you been smokin' out there in the desert, old man?

Thirdly and finally: I recently read Carrie Fischer's autobiography, "Wishful Drinking". In it, she reveals that beneath the flowing white robes of her Princess Leia costume, Lucas insisted she not wear a bra. When she asked why not, George's response was, "No one in space wears underwear. Because of the lack of gravity, your bra would suffocate you." Apparently, this was said in all earnestness. But here's the conversation as it could have happened in a more honest manner:

"Carrie, I don't think you should wear a bra."

"Because you are attractive, and the majority of people seeing this movie will be teenaged boys. I would very much enjoy the honor of giving them their first erections."

Of course, two episodes later, Leia winds up in this getup: 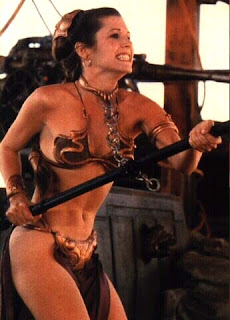 Not that I'm complaining.

I don't fault the guy for being, well, kind of a shitty filmmaker when it comes down to it. He built an empire (creepy?) and entertained/continues to thrill audiences worldwide.

In fact, I think I hear IG 88 and Boba Fett calling from the basement. 'scuse me.
Posted by rustyboy at 5:57 PM

Oh lordy, lordy! I needed that today. Thanks!

Obi was a mysogynist.

No mystery. He just didn't have faith in women which is why he thought there was only "one hope" left.

I was reading the comments and I thought Moxiee said, "Obi was a gynocologist."

Which explains his name.

If you only saw SW THREE TIMES in the theater, no way you "love" it. Now, SEVEN times... that's love.

3 times... yeesh. You should turn in your Death Star play set(including the trash compactor with original foam trash and trash monster).

Oh, you mean the Dionada, Brian?

Yes, I still have it.