I'll begin this post on a positive note: I love, Love, LOOOOOVE the PS22 Chorus. Seriously. I could watch/listen to their videos all day and night with tears streaming down my cheeks. And frequently have:

Director and teacher Gregg Breinberg has given these children an incredible gift: The ability to reach inside and call forth the innocence and beauty within us all.

Okay. Positivity intact, I can now move on to:

"Glee" is a sensation, a phenomenon, a 5 star hit for network television. It's also - in my opinion - a turd polished so brightly that you can see Jane Lynch's reflection in it. 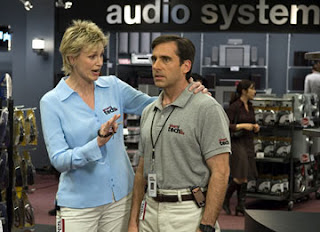 "Seriously, Steve, I am the only entertaining part of that show."

For me, the show is so incredibly unaware of how hokey it is (save for Jane Lynch), I get diabetes even from watching the commercials. But this isn't about whether I enjoy/can't stand the 2000's version of "Coprock". 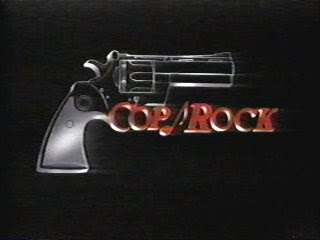 Who in the WORLD designed that logo?!?

In 1981 - aged 11 years - I discovered that I could sing, and sing fairly well. This was called to my attention (which at that point focused on why girls were starting to look "funny" to me) by the music teacher at my middle school, Nancy Guiterrez. Already involved in band, I quickly was learning that if you really want to alienate yourself from the young, developing ladies, joining the chorus would seal the deal like iron-cast welding.

But my love for music was as such, I didn't care.

I remember watching the middle school's production of "Westside Story" from the front row and - not thinking it odd at the time that 11-13 year olds actually grasped this tale of love and death - I got the itch to audition for the next year's musical.

For musical accompaniment, Nancy played every song on the piano throughout the play's duration. Again, not completely understanding the kind of physical and mental energy that involved, I took it for granted that, hey, EVERY middle school does an adult musical whose music is played solely by a single person.

I auditioned the following year for "The Wizard of Oz" and landed the part of Mayor Munchkin (in the musical, versus the film, he has a slightly larger role...LARGER! Munchkins! Ha! I am awesome). The hook was further set, and in 8th grade, Nancy revealed that that year's musical production would be "Fiddler on the Roof".

Yes: The story of a Russian-Jewish family during the era of the pogroms. To be performed by children. SOunds crazy, no?

Again, not knowing that there was anything at ALL odd about this, I got my chops ready through private singing lessons (thanks, Mom, for the support and driving and, well, everything!) and by late winter, when auditions were being held, I was prepped like a soprano Pavarotti to audition for the male lead, Tevye. 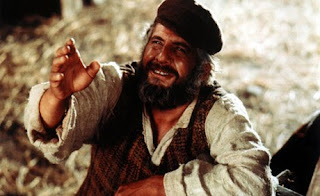 I don't recall the actual audition, but I do remember that it came down to me and another l'il guy, whose voice had already changed. I. Was. TERRIFIED! After all, my singing range was that of an alto - Tevye, a 50-something milk farmer - couldn't hit a high C, right?

Despondent, I resigned myself to Nancy's eventual decision because, as stated, I didn't care which role I played. I wanted to perform, no matter how big or small my character!

And then I got the part. 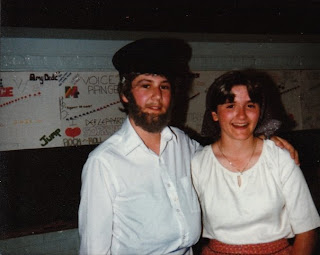 Me and my pal, Melissa - who played Golde - pre-show. Yes, the whiskers are real, as is the gut. Naturally.

Looking back, again, Nancy, coached us ALL, and got us tuned to the point that yes, this show actually happened, and in a tight, humorous, and astounding manner. I honestly don't know how we pulled it off, but I have recorded evidence (never to be shown on this blog) that each note, every scene, and even the grand, final exit of Tevye and his family during the pogrom, was SPOT. Effing. ON.

I sobbed for an hour after the final performance, such was the release.

Nancy guided us towards stellar musical goals, not at all once letting us know that what we were doing was mind-boggling. And at our middle school graduation, blessed us - in decades ahead of her time - with lyrical passions from the Broadway show, "Fame":

We sang the body electric 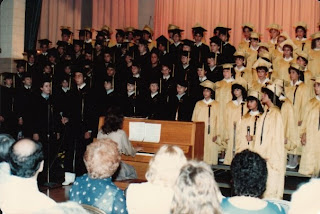 Seriously. We are singing that song in this very moment

I remember parents being confused, even slightly offended, by the fact that 13 year olds were dealing with such hefty concepts as who we all are, and where we're headed as beings. And yet, our voices carried these melodies into the rafters of the gymnasium, unaware of the message we were sending. And lo, these 26 years later, the ears of millions are excited by the idea that little children can teach us all about the vastness of the human experience.

I don't know where you are, Nancy, nor do I even believe that you grasped what you gave us all, but these gifts...they'll never leave me.

And in time
And in time
We will all be stars
Posted by rustyboy at 12:45 PM

You are quite talented my friend. We will have you sing a solo on the next podcast.

My Nancy was our librarian Raena Martin. She was wonderful.

Fame - Cripes, I haven't seen that in years. I wanted to be them.