His name was Mike. Michael. Last name started with a "K". And he was my first, albeit most unlikely, best friend in high school.

You only get to have one first, best friend. Just like you only get one first true love (her name was Stacey, and we met at - yes - CHOIR CAMP). Mike and I met sophomore year in a pre-geometry class that I'd opted to take since I'd sucked it HARD at algebra my freshman year and was looking to actually comprehend mathematics (Spoiler alert: It never worked).

Mike was handsome. And tall. My teeth were wired with miles of steel braces, and his cast a confident, even glow. My face was peppered with one thousand dots of acne while his was clear and white. Well, tan in the summertime, because Mike's skin turned a golden brown from the sun, while mine went from "Snow White" to "DEFCON 1" after 30 minutes of exposure. Mike's face was angular and even, and mine looked like Picasso and David Duchovny had pumped out a bastard love child.

As I sat in Mr. Thorn's pre-geometry class the first week, I knew about Mike, had heard stories about what a renegade he was, how even the female seniors at Proviso West High lusted after him, and that he voiced his opinion whenever questioned.

Meanwhile, I'd been crafting myself to be a strident student, a head-down, books-up, "yes sir" and "no ma'am" learner when teachers pointed a finger at my sometimes wandering attentions.

On one magical weekday afternoon, Mike and I became friends. And my life-view completely changed.

I think these photos sum up our relationship, snapped about 6 months upon befriending one another: 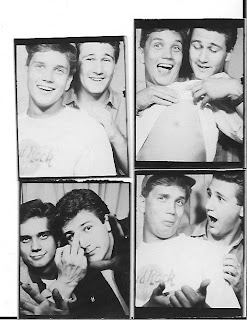 I will never forget the first time we actually "hung out" after school: Riding on his bike, me straddling the bar behind him as he pumped the pedals, riding past our high school to his home, my hands thrust above me, feeling a freedom I'd never yet experienced.

And that was only the beginning.
Posted by rustyboy at 9:21 PM