It was that time of year: Time for the running o' the Forest Park 50k ri'cheer in P-Town, USA. Last year, I had stomach issues late in the race and bonked around mile 27, dragging ass to the finish in 5:24. The trail conditions otherwise were pure perfection: Dry singletrack, partly sunny skies, hell, I even sweated rose petals and farted rainbows, it was so ideal.

And then, there was yesterday.

The weather itself wasn't the issue. The skies opened up just BARELY for a light, mid-race sprinkling, but temps bounced between 55-65 and the sun poked and peeked it's way out here and again, lighting up the beautiful canopy of bright green spring leaves above us.

Now ask me about the trail conditions. Go ahead. ASK. No, wait. I'll build up. That's better story-telling. 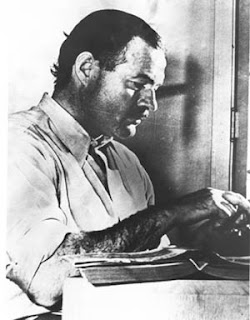 "Make 'em wait for it, runner-boy. And bring me a scotch."

At the start, I chatted with my buds Gary, Nick, and Brian: Gary was opting to run the 20k version, as he'd kicked some serious ass running a 12 hour a few weeks ago and was carefully coming back to higher mileage. Nick toed the line for the first time at an ultra, and Brian was back for his second 50k since last year, when he rolled in only minutes after me for his first ultra-finish.

The new RD made some announcements. Best I could tell, he was saying, "jdufiuslhhvkwdvbcuxu;DJDHIhf'ngivd;jj...", but I did manage to hear that there was a slight course change. Instead of taking a cutoff trail to aid station one, we'd go an extra 1/4 mile, then turn on a firelane and do another extra 1/2-ish mile to the station. As this is mostly an out and back course - and because I am an absolute math wizard - I calculated that, yeah, this wasn't 31 miles this go-round. Sweet - and we didn't have to pay extra!

With all of the fanfare that ultra starts provide ("Ready...set...GO!" a few whoop and hollers, then silence), we were off. Young Nick and I hung together, rambling, chit-chatting, bullshitting, for the first 2 miles, but I could smell it on him. He was itching to go faster. Knowing my own pace, I bid him adieu, and off he went, bounding up the hill for the 1200' climb to aid 1.

I was about to yell down the trail to Brian when suddenly, I heard his voice over my shoulder. Running the next mile or so together, something dawned on me: A few weeks ago, I'd fallen asleep and come up with the PERFECT pacer for Pine 2 Palms 100 Miler in the fall. I'd wrestled with remembering who I'd thought of for days and days, and BOOM! I realized it.

I wondered if I should had waited to ask until later in the race, when he'd be more delirious, but what the hell.

WHAMMO. Takin' care of business. What has two thumbs, holds a hand held water bottle, and can multi-task? 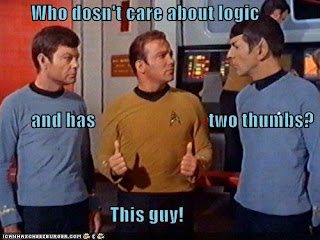 Brian was inching away, so I let him take off and told him to kick some ass. But coming back down were the 20k runners, and lo and behold, there was GARY, in 5th place, big-ass grin on his face.

"YEAH!" we both yelled, high-fiving with all we had.

I continued climbing to the first aid station, downing a banana and a gel, refilling some H2O, and off I dashed.

I fell into a rhythm and ran with a few really cool peeps for quite awhile: Timmy - a father in town visiting his daughter at PSU; Peggy - a preschool teacher from Astoria (who knows my ultra bud Kate), and Chelsea, a full time grad student, who somehow holds a full time job AND runs ultras, and Charlie and Erik, two work-partners with a running problem.

We all yo-yoed as you do and hit aid two. About 1/4 mile down the firelane was where I'd run into Ruben last year coming back up, in the lead ("I knew it, you bastard!" I had yelled) and I wondered where he was. Charlie, Erik and I headed down the firelane, noticing that the mud was getting thicker and more prominent, and in the exact same place as last year, I saw Ruben running up, his sleeveless, button down, mechanic's-looking shirt open in the wind, flowing behind him.

"Go git 'em!" I responded as we high fived. HARD. I'm pretty sure the folks at the start/finish 12 miles away heard the crack.

We were now running a 10k lollipop loop, which was PURE SLOP. There was a lot of stopping, hopping, walking at this point due to not wanting to bust my ass. Charlie, Erik and I hung together, and I kept picturing what was about to come: a .4 mile downhill that at one point is about 35% grade. With the sloppy conditions, I knew what was coming and warned them.

Okay, I'm not a skier, or snowboarder. In fact, I'm more of the, "I'll meet you in the lodge for whiskey toddies" kinda guy, the skills of which would not help me in the least for the downhill. 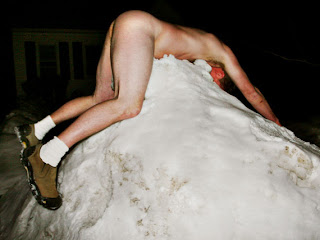 There was not a single piece of non-muddy, slick trail and honestly, if your center of gravity tilted so much as an inch too far forward, you'd tumble ass over ankles down this thing. So I took a seat and began skidding down, roots, rocks, and vegetation making their way up...well, you can well imagine.

I think that .2 miles took about 8 minutes, but we landed on Leif Erikson, a wide, flat fireroad, and greeted the change of terrain with wild enthusiasm.

We trotted on the rolling road for about a mile, then found the climb that would take us back to aid station 2, which was now aid station 3. Charlie and Erik took off ahead on the steep, slick incline, when suddenly, I dreamed I saw Gary standing on the trail.

"Damn, I usually don't hallucinate until mile 65," thought I. But then the hallucination spoke.

Gary had finished the 20k in 1:43, placing 5th. And here he was, cleaned up, and waiting to tackle the mile-long climb with me! I was only at mile 17, but I needed perking up as my legs were burning due to having to stabilize for miles and miles on the murky trail.

I hung at the aid stop with him for a few minutes as a gift to myself (it's the little things) and took off down the 1 mile downhill, passing Mo - who was looking strong as hell - and hanging with Patrick, yet another first-time ultra runner.

The downhill is a 1.1 mile, paved fire road, so the banging pretty jostling. I told Patrick, "Aren't donwhills supposed to be fun?", to which he responded, "This SUCKS!"

Hitting the singletrack, we hooked a right and just like last year, my stomach started bothering me. Not wanting a bonk-repeat, I downed two gels with a ton of water, just to get the fuel in before the nausea took over. We ran together for quite awhile, Patrick experiencing for the first time all of the pain of an ultra. Mentally, I reminded myself that however crappy I was feeling would pass, and sure enough, my stomach lightened, my legs stopped burning, and we were well on our way to the last aid station.

Mo was about 5 yards behind us, jamming away, earbuds blaring, so we scooted to the side and she swooped past us, telling us to poke her if we wanted to pass.

I needed to stop and get a salt tablet (or something - my brain was failing me at this point) and watched Patrick fade off into the woods, clearly over whatever crap feelings he'd had earlier. I reached the firelane and ran the half mile to the final aid stop, walking up to the table for water, when I encountered my second, "non-hallucination" of the day Miki, working the station. Having not seen one another in 2+ years since The Big Basin 50k, where she'd rolled her ankle in the first mile. Badly. In fact, she's just NOW getting back to high mileage, she told me. Way to go, Miki!

My right, lower back was pinching, likely due to stabilization issues due to the mud. This, in turn, made it difficult to fully inhale, which in turn, began causing side-stitches. I began a "Run until it hurts, walk until the stitch goes away, then run again" program that actually was working, because when I ran, I could run hard for about 2 minutes, walk for about 20 seconds, lather, rinse, repeat.

I began smelling the barn door a mile and a half from the finish, when I came upon a family of hikers, their 2 year old son wailing and crying.

Hooking a left, I had about .8 miles to the finish and began hauling ass. I started tricking myself into running scared, so as to not get passed in the final half mile. I hit pavement - indicating I had a tenth of a mile left - and picked it up. Passing Annie and our friends Kimi and Carl, who were along out of curiousity and for support, I saw Nick standing at the finish. He screamed, "YOU'RE SO SEXY!" and held his hands out, so I took my water bottle and lobbed it about 10 feet at him, missing my mark completely. I hit the finish in 6 hours and a few seconds, turned around, seeing my buddy Charles videoing my finish as well. I gave him a grimy, mud-covered hug and found out that Nick had finished AN HOUR AND TEN MINUTES ahead of me. Daaaamn. 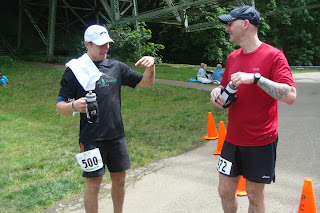 Me: "What's your secret to such a quick finishing time?"
Nick: "White hats make you faster!"

Brian was hanging at the finish as well, having beaten me by 25 minutes (WHO ARE THESE PEOPLE?!?!). I broke the news to his fiancee that he'll be spending 12 hours dragging my ass up and down a mountain in the fall, which she seemed receptive to (thank god), and Annie, myself, and our friends headed out for a late lunch. 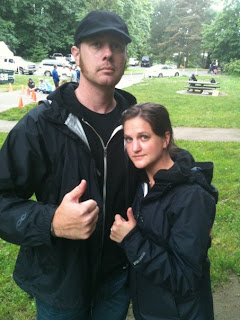 
And as for the mud? 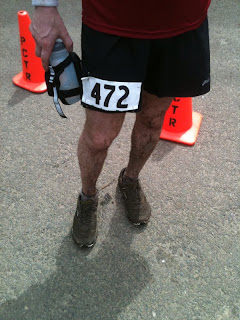 I swear, there is skin under there somewhere
Posted by rustyboy at 12:25 PM

I like the fact that I can rate this "neato". Because it is.

Sounds like it was a hell of a lot easier simply meeting you at the finish rather than running that whole mess with you. Cheers...'Here's mud in your eye'...

Awesome report. Great day. I wish I could have been at the after party, but I had to work. Still, a great day. Many more to come!

This was a fun read. Love it!

Awesome job! Tough conditions, but fun day. Good, dirty fun. I like it!

Fun report! I was snorting and laughing throughout the entire thing. I really, really want to get back up there for that race.