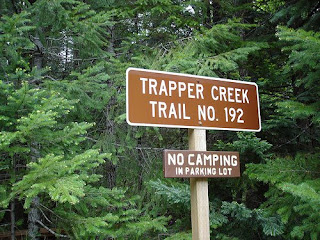 Sunday's long run - my last before this Saturday's 50 miler - was to be a 13 mile loop, plus a mile out and back, on the trails of Trapper Creek in Washington. It's a bit of a drive, but Annie and I figured we could stop at THE AWESOME PLACE WE'RE HOLDING OUR WEDDING RECEPTION, drop off the contract and deposit, and continue out into the Gorge another 30 miles to the pictured trailhead.

And this is exactly what we did. And then the real excitement started.

The guide book I'd recently purchased called these trails "beautiful" and "winding" and, for the loop I was running"strenuous". Now this is a hiking book, and I? I AM A TRAIL RUNNER, dammit. Strenuous? How tough could it be? I've hauled my carcass up and down mountains for 3x that distance. Strenuous. Pff. Man up, publishing house that spat out this somewhat pedestrian guide to *hiking*.

What's that one saying? About pride and the fall? And cometh?

Before I scurried off, I told Ann I'd likely be back in 2 1/2 hours, around 6:30. She herself was going on an hour long excursion, so we scanned the map so I could double-check the two trail numbers I'd need to follow, made out for a few minutes (not really, but kissed goodbye), and away we went.

This trail. Ruled. Rolling single track with a few short climbs and drops, all along the banging waters of Trapper Creek. I was in heaven. But, to quote The Ozark Mountain Daredevils - which hey, we've all done time and again...AMIRITE? - "...if you wanna get to heaven, you gotta raise a little hell." Or at least run through it. And by mile 5 or so, I was staring into the yawning mouth of The Beast™ himself.

The cutely named "strenuous" climbs were, um, ridiculous! Like, on all fours type of climbing. And I quickly realized that the mile or two of straight up-fucking-hill was taking me from 1500' elevation to 4,000'. The air grew thinner as I scrambled along the tightly winding singletrack plastered against the side of the hill. Looking down, I could see the once rushing and wide creek snaking like a tiny shoelace 500 feet below.

"Shit," I hoarsely muttered, my head growing dizzy. "I am UP here."

And the climbing, as suddenly as it began, stopped.

I kept picturing the map, and about where I was. I stopped and marveled at crashing falls across the canyon for a few moments...which is when the nausea settled comfortably in to my gut. I felt my heart racing from my pace, but I knew I had to plug on, as Ann would be expecting me in an hour or so, and to reach her by that point, I'd have to be FLYING the rest of the run. Which was made incrementally more difficult when the trail - quite literally - stopped at a cropping of shrubs.

"You gotta be kidding." No way was I going to turn around and head back - I was about 9 miles in at this point, the point of no return. It would be longer to flip around and head back than press on. Except pressing on would normally entail, oh, SOMETHING TO FOLLOW while pressing on. My cellphone had zero reception, so calling Annie to let her know I was going to be dorking around out there a bit longer was about as much of an option as, say, having a trail to run on at this point.

I was pissed and a bit freaked, so I dug around in the shrubs, hoping to see some semblance of a dirt path. Nope. Nothing. I wasted about 5 minutes whacking bushes and trudging through forests of poison oak, finally backtracking 50 or so yards and running towards the dead-end, in hopes of giving a fresh visual angle, and POW! I saw it: The trail ended all right, passing between two trees into the shrubs but, well, they'd diverted it to hook around one of the trees set up like field goal posts. I have NO idea how someone without experience in the woods would find it as it snaked perpendicularly to the dead-ended trail, under heavy cover of branches and brush. Elated, I pressed on, now on the "loop" portion of the loop, heading towards trail #132, where I'd hook a right and begin my decent back to the trailhead. Should be only a couple of miles, according to the map...

I'll say it right here and now: Screw that map.

Luckily the trails were rolling, so I could pick up some speed along the way. I passed through a creek, really pushing my pace, keeping an open eye for the trail intersection. After 20 minutes of running, I quickly realized: That map was as useful as a mute opera singer. I raced by a small tent about 20 feet off-trail, where I could see someone sleeping. Okay, if all else fails, I can hump back and see if he has an accurate map. I was fine with food and water. The thin air was playing tricks with my brain however, so I had to keep reminding myself, "You're close to the trailhead. You aren't lost. Get back safely and don't worry about Ann calling rangers. If it happens, it happens. Just be smart and don't slip up/get lost/crap your shorts."

I finally hit an intersection marked by a post without a sign. This couldn't be my turn: It should have been a dead-end, and I would take the right turn. But the trail continued straight. I looked down, and a small sign sat on the forest floor beside the post: "Shortcut Trail".

Shortcut to where? This trail wasn't on the map. GAH, that MAP! I calmed myself, took some breaths and logically deduced that there was only one trailhead for this entire network of trails. "Shortcut" was the way back to that. It had to be.

There was more climbing, which didn't necessarily lead me to believe I was on my way back "down", but I hit an intersection about 8 minutes in. An intersection without a marking. I desperately wanted this to be trail #132, so I hooked a right, following instinct, and began running like a deer down the slowly dropping grade. By now, I was a half hour behind when I told Ann I'd be back at the car. "Can't think about that," I told myself. "Just get back in one piece." Again: My water pack was about 1/3 full still, and I had a Gu left to eat for sugar. I couldn't be more than 4 miles from the parking area. So I dashed.

And I mean, I dashed. I must have been clocking 8 mn/mile on the winding downhills...the narrow, wedged-onto-a-cliff's-side downhills. Again, the drop revealed to me exactly how high up I was, and it was impressive.

That's when my foot slipped on loose rock.

I quickly regained my balance and continued, giving myself affirmations on my speed and dexterity, cursing that hiking manual again and again. "Strenuous"? How about including, "Parts of this trail may give way, sending you sailing 1/4 mile off of a cliff's edge?" Within 1 minute of that slip, another hit, with far more dramatic results:

As far as I can ascertain, my right foot sent a portion of the trail crumbling, taking with it, well, my right foot. My left - now lonely without it's partner - followed suit. Without a thought, I twisted my torso and caught the trail with my forearms. My feet touched nothing but the shrubs growing off the cliff's side, so I was now dangling, held only by my arms, with about 500-800 feet of drop below my kicking toes.

I relaxed and let out a breath, the inhaled and pulled with all I had, which did about as much good as farting into the wind. I saw a root a few inches from my hand and gripped it. You know the scene at the beginning of "Raiders of the Lost Ark", when Indiana Jones, after grabbing the golden idol, has to leap across the yawning chasm to slide beneath the slowly closing wall of rock? Remember how he, dangling on the edge of the chasm, grabs a root and begins pulling himself up, a relieved smile creeping across his mug, only to have the root give way and send him further back down into the pit?

Yup: Exactly what happened to me.

The root gave way, and I slid a good 2 feet down. Then -so as to not infringe copyrights and attract lawsuits from Spielburg - the root snapped. I dug in with my fingers, and with this fresh rush of adrenaline, I cried out, "Heeeeee AAAAH!" and pulled myself up on the trail. And began running without missing a beat.

Looking back, I'm glad that I did, because had I paused to absorb the reality of what had just happened, I probably would have had a nervous breakdown then and there.

So I was back to pushing downhill. I encountered two hikers, scaring the crap out of them, as I asked how far it was to the trailhead. They offered a map, but I felt it best to keep sprinting, as I was now over an hour later than scheduled. Shadows began stretching across the trail. I knew I was growing close, as the drops leveled and I was now on rolling ground. Within a few minutes, the intersection with the trail I'd started on 3 hours prior cropped up. I hung a left, racing now, blowing past roots and rocks to get to the car before Ann had a coronary. Then, I saw her, 50 yards ahead, hiking back. I called her name, and she gasped and turned around. And the tears came. She was literally a 5 minute hike to the car, her plan: To drive to a ranger station and get search and rescue to look for me. We kissed, cried, exhausted from this "adventure", and I, pissed off at that God damned guidebook.

Once we collected ourselves, we changed clothes and headed back toward the freeway, stopping for drive thru burgers and drinks (I downed 56 ounces inside of 10 minutes), and drove back home to Portland, relieved, beat, and ready for a night's rest.

Judging by my pace, I figure that actual loop is somewhere in the vicinity of 15 miles, with about 3500' of gain. That's a LOT for a short loop. In fact, my last 50k had the exact same amount of gain, but with it spread twice the distance.

The reality of the entire ordeal hit me on Monday night, and I sobbed with relief with Buffy the Vampire Slayer spinning in the DVD player.

Effing map.
Posted by rustyboy at 9:41 AM

Good lord! You had me on the edge of my seat thinking, "Please don't let him have broken a bone!" Damn, son.

Now git out there and run that 50-miler.

I've been waiting for this write up following your tantalizing facebook update.
Wow.

So SO glad that you are okay.

I think I'll start calling you JJ, for Jeremiah Johnson, or maybe Ishi. I'll have to give this more thought.

I just hope the trail guide you used isn't the same one I just purchased, though I wouldn't be stupid, I mean, brave enough to go out and run any of these trails on my own.

Glad you're okay, and hey, you're building up some serious street/trail cred!

Awesome story though, right?!
Poor worried Anne!
Good luck in the 50. Can't wait to hear about it!

I know the experience was even more harrowing than this tale. Amazing Russ! Glad you're ok.

Holy crap! I didn't see this until just now or else I would have beaten your ass on Saturday for doing something so nearly injurious. DON'T scare me like that again!