This journey of fifty miles (okay, fifty ONE miles, due to some navigational issues...and I honestly don't believe the course itself was "only" fifty. Probably more like fifty three) begins not with my toe at the starting line, nor does it launch into storytime at mile 30, when the real "work" begins on a 50 miler. Nope. Friday afternoon -a full 15 hours pre-race, the drama begins to unfold...

About 25 miles from the hotel, in "beautiful" Gresham, OR (quotes make for awesome sarcasm!), my car started rumbling and jostling. The "check engine" light flashed maniacally on my dash. My first thought was, "Oh, shit!", followed by the ever-insightful, "Oh, fuck!" We pulled off into an apartment parking lot where I struggled for 5 minutes to pop the hood (calling me mechanical is like calling Gresham, OR "beautiful") and we stared at the mostly computerized circuitry.

Ruben: "Maybe there's a garage up ahead?"

I shit you not, 4 blocks farther along, and there it was: a fix-it garage! The owner was kind enough to take us in, and while I filled out paperwork, Ruben was on the phone with an idea: His room mate was only 5-10 miles further east of us, in The Gorge, on a hike with visiting friends. Maybe she could - on her way back west towards Portland- pick us up and lend us her car? Hey, it was worth a shot.

T-minus 12 hours until the start and counting.

Lo and behold, she was happy to swing through and pick us up, although it would be awhile. Ever-hungry, as ultra-runners tend to be, Ruben used something called the "IN-TER-NET" on his phone and nailed down an Italian restaurant only a few blocks away. We strapped on our packs and hoofed it to "Guiseppi's", feeding our faces with 17 pounds of pasta each. 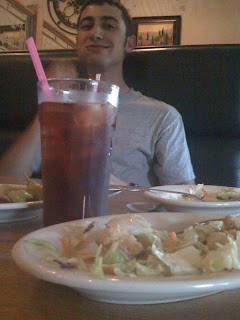 Minutes after finishing, Ruben's room mate and company came rolling into the lot. We got nice n' cozy for the 25 mintue trip back to Portland, where we'd left 2 hours prior. 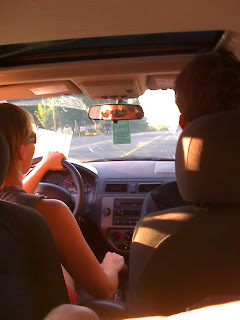 Profusely thanking them, we started back out from where we'd just came, hopping on the highway, jamming to Prince. Ahhhhhh. Time to relax, no?

About 10 minutes into our drive, Ruben's phone rang. It was his room mate, asking if we could locate a small pencil case. I turned and found it nestled in the back seat. Inside of it? Only her driver's license. Hell, why would she need that? They were only going out to bars that night. Why would someone in her mid-twenties who looked like she'd just graduated high school need her I.D., I ask of you?!?! 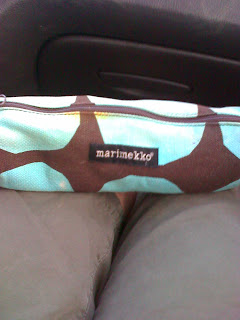 And so, we turned around and headed back to Portland, yet again.

Determined to get to the hotel, or at the very least, give up on life and join a monastery, Ruben pushed the car away from the setting sun towards the hotel, where we checked in at 9:30: 4 1/2 hours after this winding, ambling, stumbling journey had begun.

Tune in later, kiddoes, for...well, the actual race report.
Posted by rustyboy at 9:48 AM

Please, oh please, tell me this does not portend things to come. I'm on pins and needles, doggone it!

Goddammit you're such a tease!!